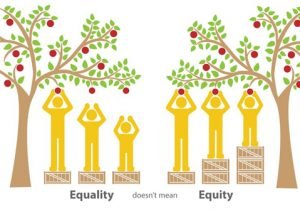 What is health equity?

Addressing differences in health that are avoidable, unfair and unjust.

Some of these differences include:

When a person or group is treated unfairly because of race, gender, income level or sexual orientation.

Housing, income, transportation, access to affordable healthy food and employment are all things that greatly influence the health and well-being for individuals and communities.

These things combined are often referred to as the social determinants of health.

While it is important to encourage people to make healthy choices, it’s important to remember that not everyone has the same options.

Priority populations are those that are experiencing and/or at increased risk of poor health outcomes due to the burden of disease and/or factors for disease; the determinants of health, including the social determinants of health; and/or the intersection between them. They are identified using local, provincial and/or federal data sources; emerging trends and local context; community assessments; surveillance; and epidemiological and other research studies. (pg 19)

Priority Populations are individuals and groups at greater risk of negative health outcomes due to their social and/or economic position within society.  Examples include, but are not limited to, those living in poverty, those who are marginalized due to language, gender, sexual orientation, culture or social status and those who live in rural and/or isolated communities.

Often times, equality and equity are used interchangeably, but there is a key difference.

Here is the difference explained:

Imagine a group of 30 people are each given a free pair of size 9 running shoes.

The shoes were distributed equally, because each person got a pair, but not equitably because not everyone wears that size shoe. 1

These are the people living in Your Community

In Haldimand and Norfolk…