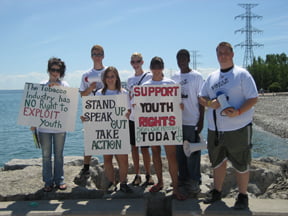 SIMCOE, ON, Aug. 24, 2007 – Several members of the Haldimand-Norfolk Health Unit student group, Fresh Heir, joined a youth rally in Burlington recently to press for Canadian laws that would protect young people from exploitation by tobacco companies.

The group, committed to “clearing up Big Tobacco for this generation and the next” gathered with hundreds of other like-minded students from throughout southwestern Ontario to pressure Parliament into passing laws that would shield young people from tobacco industry marketing targeted at this age group.

“Overwhelming independent research shows that tobacco advertising leads to increased consumption, with 80,000 young people around the world becoming addicted daily,” said the Health Unit’s Josh Daley, Youth Advisor, Smoke-Free Ontario Program. “Young people also have the right to be alive; however, it is estimated that 250 million children alive today will die from tobacco-related illnesses and disease.”

The local youths participated in a walk along the Burlington waterfront and assembled in Spencer Smith Park to gather signatures and raise public awareness of the United Nations policy.

Canada signed and ratified the UN Convention on the Rights of the Child nearly 17 years ago, requiring the government to protect young people’s rights under this convention. Almost every country in the world has now signed this United Nations treaty. Under this convention, young people have the right to be protected from information that may harm their well-being.

“While there is no reliable estimate of global cigarette marketing expenditures, it is likely in the tens of billions of US dollars a year,” noted Monica Fess, a Peer Leader with Fresh Heir. “These multi-billion dollar tobacco companies are targeting and exploiting young people in Canada and around the world, ignoring the numerous health and financial consequences they are causing, all for the sake of boosting their profits,” Fess said. “For obvious reasons we think such unethical practices are wrong, so we’re speaking out against them in hopes of opening the eyes of our government and, more importantly, other teens.”

Fresh Heir is always looking for volunteers to help in its efforts to protect youth from the tobacco industry. Those interested in getting involved can contact the group at [email protected] or call the Haldimand-Norfolk Health Unit at 519-426-6170 Ext. 3276 or 905-318-6623.